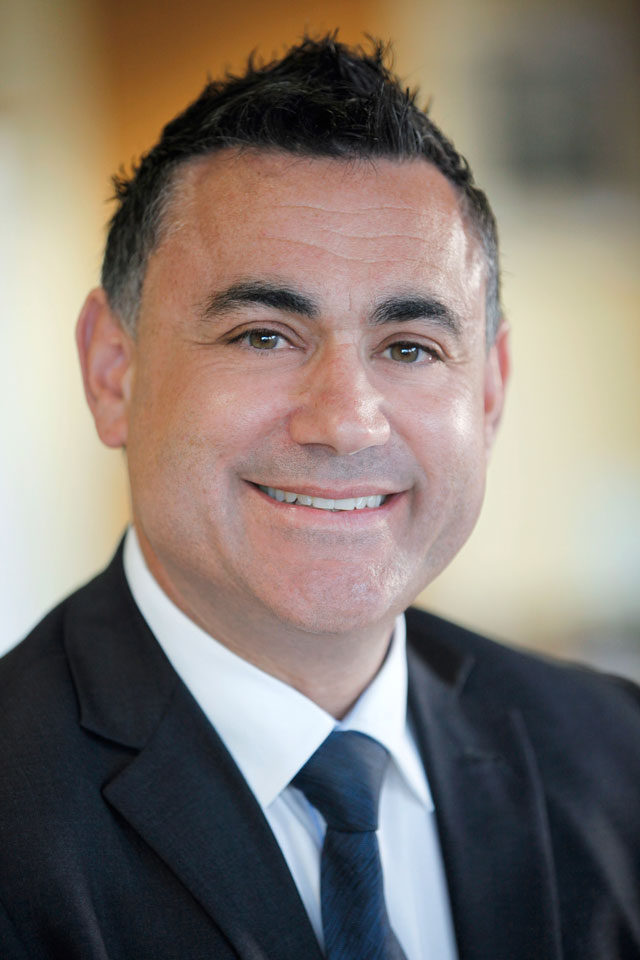 John Barilaro was born in Queanbeyan to Italian migrant parents who arrived in Australia in 1968. Their hard working and selfless approach was an example which instilled in him strong values of family and community service.

John still lives in Queanbeyan with wife Deanna and their three daughters, and shares his time between the Monaro, regional NSW and Sydney.

He is the proud Member for the Monaro and in 2016 was elected Leader of the NSW Nationals and Deputy Premier of NSW. He is the Minister for Regional NSW, Skills and Small Business, bringing a ‘hands on’ understanding and passion to his portfolios.

Prior to entering politics, John ran his family business in Queanbeyan for 20 years, manufacturing energy efficient windows and doors.

In 2008, he entered politics, standing for election to the Queanbeyan City Council because he believed the mums and dads of his community needed a greater say on the decisions that affected them and their local area. Three years later John stood as a candidate at the State election because he saw The Nationals as the only party that could truly deliver a fair share for rural and regional areas.

Having spent most of his working life running his own business, John has also been through most of the challenges, joys, risks and rewards that come with starting and operating a business.

The Deputy Premier strongly believes in supporting a thriving business economy, building a skilled workforce for the future and investing in communities across regional NSW.

In the 2017-18 NSW Budget, John delivered a $1.3 billion Regional Growth Fund to turbo-charge regional economies across the state – giving community’s choice in selecting the local infrastructure projects they want and need.

A passionate advocate for Vocational Education and Training (VET), John has started a successful campaign to change the perceptions around VET and make sure we have the skilled workforce needed to keep up with the massive investment by the NSW Government in infrastructure and technology.

Regional NSW will receive a massive $4.154 billion after NSW agreed to transfer its share of the Snowy Hydro Scheme to the Commonwealth. John was instrumental in ensuring that every cent of these once-in-a-generation proceeds will be spent on productive infrastructure in the regions.

The Deputy Premier and NSW Nationals Leader is overseeing one of the biggest investments in the state’s history and believes in fighting every day to make sure that regional NSW gets its fair share.