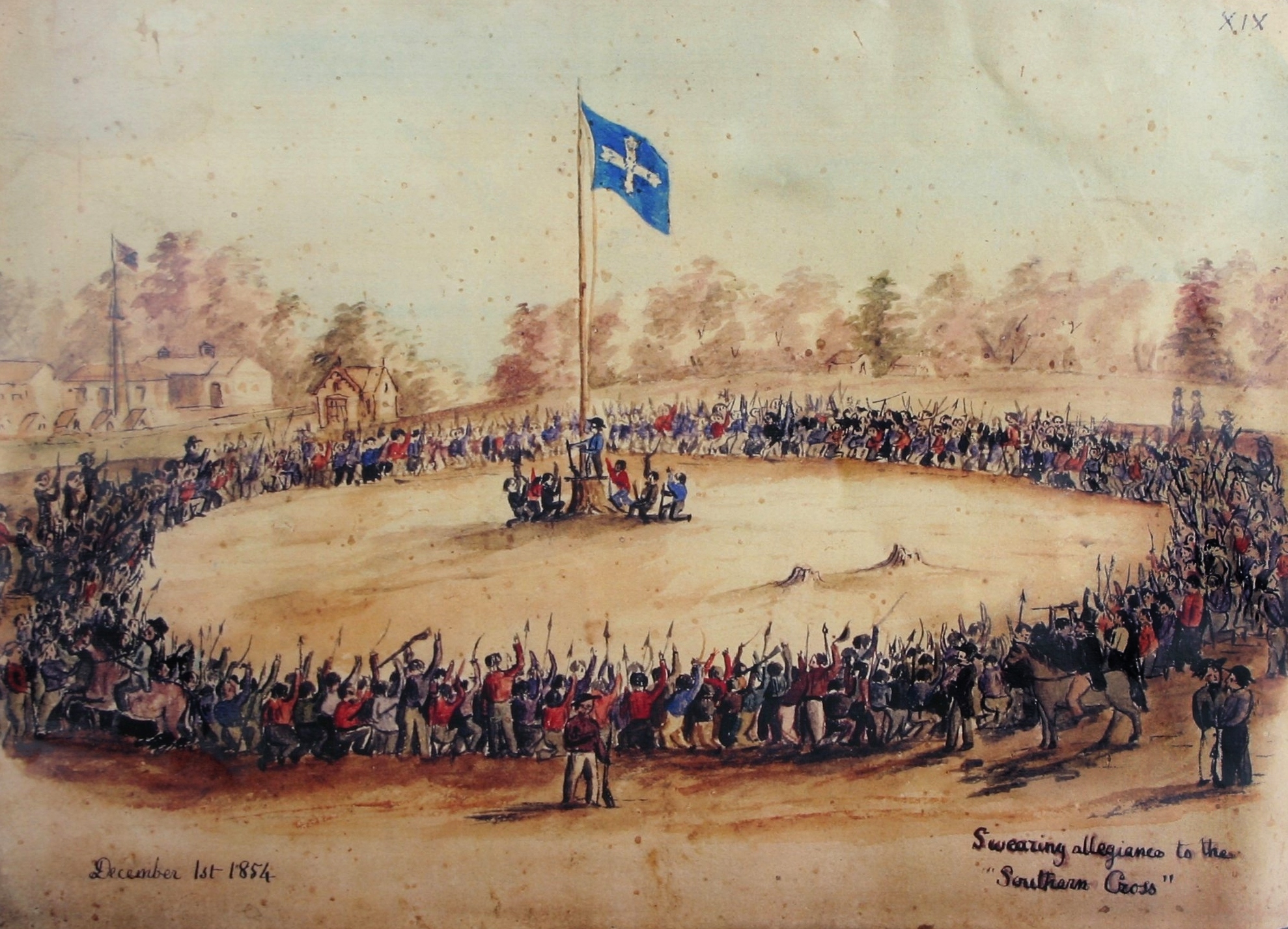 As you know our gift to speakers for some years now has been a faithfully recreated version of The Eureka Flag that we call The Mining Flag. The free spirits and actions of hard working prospectors and miners at Eureka became a beacon for the formation of democracy in a young and pre-federated Australia.

A cowardly dawn attack by a massive force of soldiers saw 30 miners die under this flag in December 1854. More recently the CFMEU somehow got the idea that putting it up on building cranes worked for them too, and fair enough they are Australians too. It was however a brotherhood of belief – rather than fee paying unionism – that united these miners and took them beyond that catastrophic Sunday as builders of a new awareness about what it means to live and work in a free country.

This note is to say thank you to the Rule of Law Institute that has prepared a great opening note and a stack of educational materials you can find below highlighting the foundations built by some clear thinking miners. You might like to follow the good work of this Sydney-based Institute.

Share this email, print the stuff, play the video, and you can proudly tell your friends, children and grandchildren about the formative role that miners had in creating the will and constitution of our Commonwealth.

Lets go back to 3rd December 1854 to a field named Eureka.

On December 3rd 1854, gold miners stood against colonial forces in a field at Eureka, near Ballarat, Victoria. It has often been considered a tragic skirmish between miners and a colonial government. But history shows it was much more than that.

The true reforms of Eureka came from those who rose after the skirmish. Those who wanted to see Victoria governed by good laws that recognised human rights and fair and equal representation. The miners wanted more than the Gold Licence abolished, they wanted a voice in making the laws that they were called to obey. They wanted an end to tyranny and heavy handed policing. They wanted those in power to be held to account. They were able to achieve many of these rights and liberties soon after Eureka- with the amended Goldfields Acts, the Electoral Act, Payment of Members Act and the Victorian Constitution. These laws were the beginning of many of the important freedoms and rights we enjoy in Australia today and became the beginning of representative democracy that ensures all Australian have the chance of a ‘fair go.’

“Put down your guns, mates. The government is more afraid of you with a newspaper in your hand than a revolver”.

Sadly, many educators skip over Eureka as it is not seen as ‘politically correct’ or even too politically loaded. It is true that Eureka involved a violent fight where lives were tragically lost. It is true that not all nationalities and genders were treated equally on the goldfields. It is also true that many political parties have used Eureka as part of their narrative. However, Eureka must be seen for its important place in Australian history. Eureka was the beginning of representative democracy in Australia and has made us the nation we now are- where all Australians, no matter their gender, country of origin or station in life, have a voice in making laws and the ability to hold decision makers to account.

The Rule of Law Education Centre wants this story told in Australian schools. We have created resources for teachers in schools to teach the next generations of Australians about the critical role of Eureka in securing the rights and freedoms we enjoy in Australia today. These include a storybook reading, a timeline to democracy, research cards and a fun debate. Please share these resources with your friends and any educators you know. 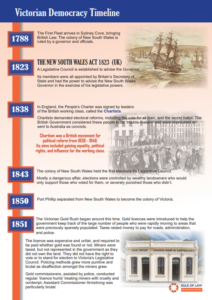 Timeline of Democracy in Victoria and Australia

See how the events at Eureka shaped representative democracy in Victoria and Australia.
Starting with the Chartist movement in England and the Charter of Rights written by the Ballarat Reform League, the miners at Ballarat were not just fighting against the violent police raids on Gold Licences. They wanted a fair go! This included the right to vote, the right to stand for parliament (and be paid for it) and responsible Government.
In less than 5 years after the skirmish, many of the rights and liberties that the miners fought for were granted.